Rbat says he deserves it. The people who bet on him (starting with the three bidders here) might disagree.

It says a lot that he wins a Silver Slugger in a "down" year.

Ken Rosenthal at The Athletic:

Nola threw him a sinker on the inner half. Soto pulled in his hands and ripped a game-tying, 105.7 mph RBI double to right. By the time the inning was complete, the Padres had scored five runs, completing their rally from a 4-0 deficit in an 8-5 victory that evened the series at one game each.

Soto still is only batting .222 with a .560 OPS in 40 plate appearances this postseason, but his numbers are somewhat deceptive. No hitter in these playoffs has hit as many balls 95 mph or more, though a number of players, including the Phillies’ Bryce Harper, have produced higher hard-hit percentages. The Padres know Soto is capable of a major surge at any moment, even though his postseason has been an extension of his September/October, when he batted only .220 with a .726 OPS.

“I think there was a stretch there where he wasn’t playing obviously up to his standards. He wasn’t playing very well at all. I think it was one of the worst stretches of his career,” said the Padres’ Josh Bell, who joined the Nationals in 2021 and accompanied Soto in the trade to San Diego. “As of late, I know that his numbers don’t show it, but he’s squaring up a lot of balls.

“I’ve played with Juan long enough to know he’s the type of guy who is not going to chase. He’d rather take strike three called if it’s a ball off the plate. He’s not going to expand just to put something in play. I know when he’s getting his ‘A’ swing off — and it’s always on strikes — good things happen. Some people will say he’s too passive, but just know when he’s swinging the bat it’s with authority. And when the luck changes, we’re going to be in a really good place.” 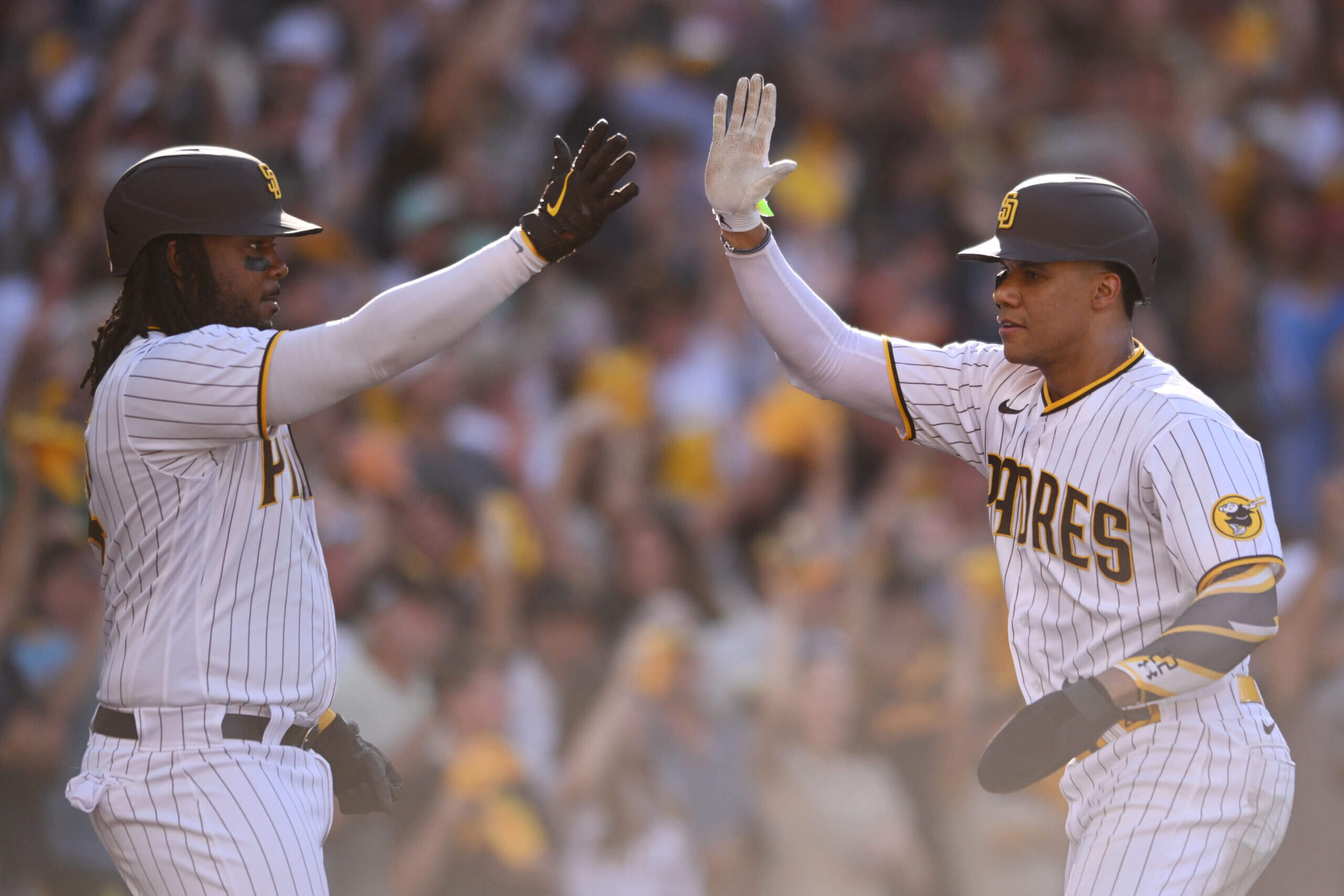 “Passive” is an accurate description of Soto during his time with the Padres — he swung at only 34.9 percent of the pitches he saw after the trade through the end of the regular season, the lowest percentage of any player in baseball with 175 plate appearances. Yet, while restricting his swings mostly to strikes, he is hitting for far less power, a development rival evaluators find baffling.

Soto has not hit a home run this postseason, and his double off Nola was only his second extra-base hit. In the 2019 playoffs, he produced a .927 OPS, including five homers and three doubles, in 75 plate appearances. The Nationals ended up winning the World Series.

The Padres want Soto to go to left-center instead of being so pull-oriented, believing an opposite-field approach will help ignite him. Soto hits one drive after another to left-center in batting practice, but he has yet to duplicate that pattern in games. Rival clubs have noticed, and used the changeup as a weapon against him. When Soto is at his best, his barrel lags, creating significant length in his swing plane.

That’s the technical aspect. But the transition Soto underwent in the middle of the season is part of this, too.

Soto spent his first seven years in the Nationals’ organization after signing with the club as an amateur out of the Dominican Republic in July 2015. Padres second baseman Jake Cronenworth, who arrived in a deal from the Rays in Dec. 2019, said getting traded for the first time can be jolting for a player.

... In Washington, Soto spent the early part of the season hitting in front of the fading Nelson Cruz before the Nationals moved the more productive Bell into that spot. In San Diego, Soto bats second in front of Manny Machado. Opponents are reluctant to pitch around him, and attack him more aggressively.

“When you have a great hitter, an MVP-caliber player behind you, they don’t want to walk you at all,” Soto said. “There are not any more four-pitch walks. It’s kind of tough when you don’t feel your best at the plate and that’s happening. But you’ve got to keep battling and going through it.”

He remains a work in progress, producing inconsistent results, but the big hits are coming now. A two-run single off Edwin Díaz to extend a 4-0 Padres lead over the Mets in the deciding game of the Wild Card Series. A double off Tony Gonsolin that led to a 1-0 lead in the Padres’ 2-1 victory over the Dodgers in Game 3 of the Division Series. His game-tying double off Nola on Wednesday, which had Petco Park roaring.

“The expectation level for him is off the charts, which is hard to live up to. Coming to a new place, so much is expected of you,” Padres manager Bob Melvin said. “But he has gotten some really big hits for us at big times. And you know he’s probably two at-bats away from going on a tear.”

Soto senses it, too.

“Every at-bat, little by little, I feel better and better,” he said. “It’s pretty close. There’s just one little thing I got to fix.”

What is that little thing? Soto wouldn’t say. But if he finds it, the 2019 version of Soto soon might reappear. A vision from the past, at the ripe old age of 24.

Padres walk in back door ... they suck less than Brewers ...

Zero for 3 with a walk and a strikeout again last night.  Crushing disappointment is right.  I traded for him and Musgrove (with Texpope, actually) since I have a great shot at a home league title this year.  Since I acquired Soto:  in 65 ABs, his OPS is .603, with 1 HR and 7BI, hitting a cool .169.  Yikes.

As my team sinks farther and farther out of contention, I've stopped looking for or thinking about Soto's line. It's a shock when he contributes anything at all. Just an absolute crushing disappointment.